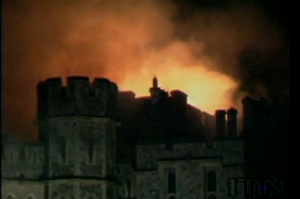 The fire at Windsor Castle occurred on the morning of 20 November 1992.    The castle suffered severe damage in the fire, which destroyed some of the most historic parts of the castle which is the largest inhabited castle in the world.

The fire began in The Queen’s private Chapel at approximately 11:30 am when a curtain was ignited by a spotlight.   Within an hour of the first alarm there were 39 pieces of fire apparatus, with over 200 fire fighters.  The fire was finally brought under control after approximately 9 hours, with small fires continuing to be fought into the next day.

There were more than one million gallons (4,500 tons) of water used in fire suppression activities.

The fire was allowed to spread rapidly due in large part to the lack of fire stopping in various ceiling voids and cavities.

The cost of the restoration work was approximately US$50 million.