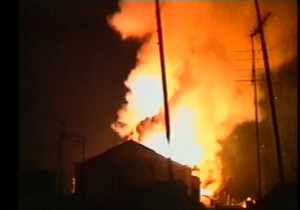 On 29 January 1996, La Fenice was destroyed by fire. The fire was started by two electricians. Their reason for setting the fire was apparently due to their contracting company facing significant fines for delays in their repair work.

Further exacerbating the situation, was the fact that due to the renovation work going on inside La Fenice, the fire alarms had been disabled, thus delaying detection and notification of the emergency responders. In addition, the canal just outside the opera house had been drained for dredging, cleaning and repair. Thus fire-fighters who use fire boats instead of fire trucks, had trouble drawing enough water to suppress the fire. Given the close proximity of the opera house to adjacent buildings, as well as the embers rising up and settling on other roofs throughout Venice, there was considerable concern about fire spreading beyond La Fenice.  A helicopter was eventually brought in  to draft water from the Grand Canal and drop it onto the burning structure. The interior of La Fenice, with its centuries-old interiors, paintings and ornate carvings, its collections including originals of Verdi’s La Traviata along with other operas originally commissioned by La Fenice, were all destroyed. The exterior made of stone remained had limited damage and was used in the reconstruction.